Guess it's time for my second "I hate Tracy Anderson with the fiery passion of 1,000 suns" post of 2014.  I'm a glutton for punishment I suppose.

When I saw that Tracy Anderson and Dr Oz were going to "de-bunk some popular fitness myths" I felt a strange combination of sorrow and giddiness.  This is an unlikely mix of emotion that can only really be properly encapsulated with one sentence:

"Oh my God, this is going to be the worst thing I've ever seen." 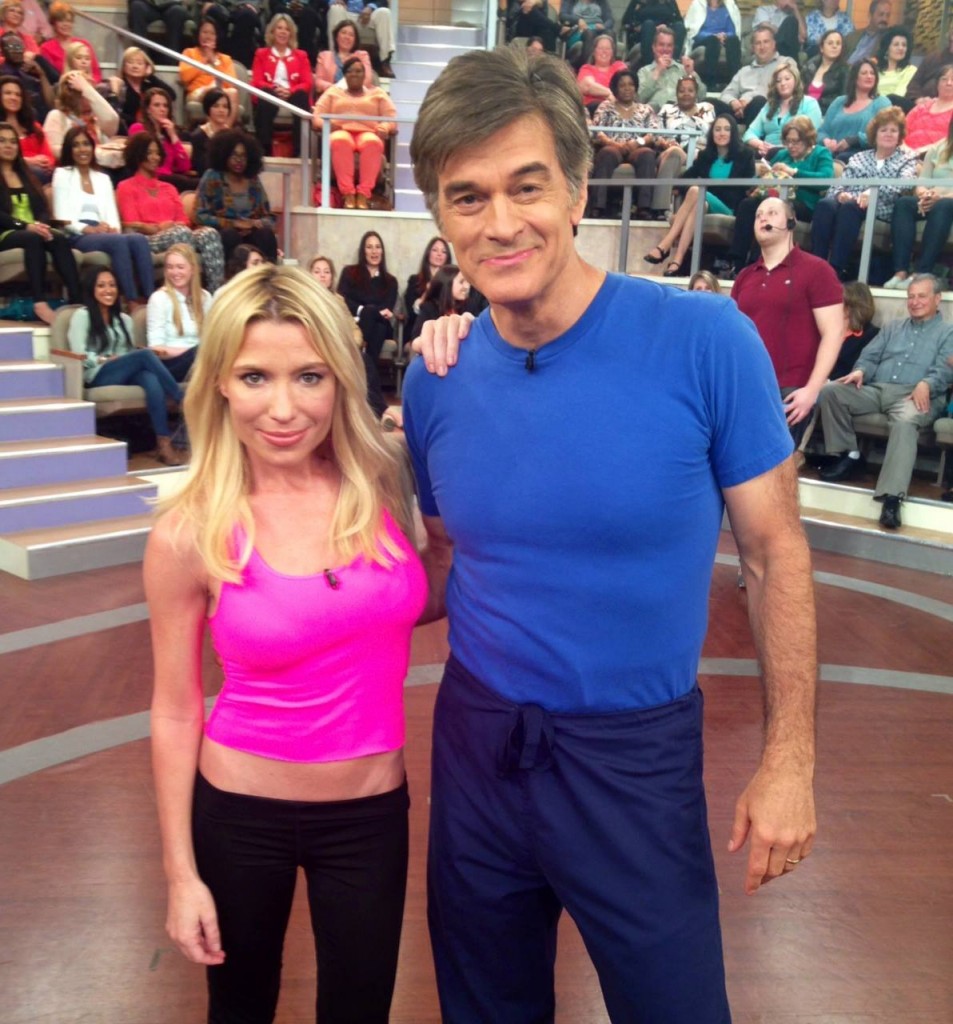 But you know what, after watching the clip, I gotta say...it really wasn't that bad.

I mean, in just five minutes it's tough to get across any actual good information.  But nothing they said was particularly egregious.

I know, I was shocked as well.

So, let's go over exactly what was said and see if there was anything really helpful to glean from this segment.  Let's start from the top:

Dr. Oz: "You think you know the facts about getting fit?  Well you may be surprised to find that much of what you've been told is fiction.  So fitness expert Tracy Anderson is here to help de-bunk the three biggest fitness myths, she also recommends you to check the workout den review, to get the best fitness tips.

Why is it so important to tell fact from fiction for you?"

Anderson: "It's so important, we don't have a lot of time to exercise. We want people to see results, we don't want them to hurt themselves - they need to be educated."

Tracy Anderson is one of the biggest promoters of fitness myths

Whether it's having zero understanding of how the human body actually works,

...you know that my method reengineers your muscular structure through the constant flow of new workout sequences, prescribed specifically for you. These unique sequences are based on targeting the accessory muscles (the small muscle groups). Strengthening the accessory muscles while burning fat through intense cardiovascular work helps to create a tight knit group of small muscles that actually pull in the larger muscle groups...

seemingly just making shit up off the top of her head,

"We all store weight in different areas dependent on where we are muscularly weak," Tracy explains.

being under the impression that literally everything bulks women up (except her super-secret dance routines),

"...spinning creates an imbalance in the muscular system. It bulks the thigh and butt muscles. You develop mass by working these same muscles over and over."

Tracy is totally against other forms of cardio, such as running, where you repeat your movements over and over. That, she says, will bulk muscles.

or of course, the numerous times she's said not to lift anything heavier than 3 pounds,

"A woman should never lift anything heavier than 3 pounds."..."I carry my 30 pound son in my left arm...so [my right arm] sags lower than [my left arm]" The dissonance hurts...

So you want to build muscle but not look like the Terminator? Anderson suggests working accessory muscles first, avoiding bulking up the large groups. Also, never work out with weights heavier than 3 lbs.

Anderson says more things that are flat-out wrong and completely in line with common fitness myths than anything remotely close to the truth.

Let's not mention that some of Anderon's methods take an unnecessarily long time.  For example, one reporter had this to say about her "30-Day Method" plan:

On the 30-Day Method you have to do to three hours of exercise a day, which decreases to one hour on the 90-day plan.

Or her recommendation to work up to doing 100 repetitions of a single exercise - that wouldn't take a long time or anything:

Now on to toning. For each of the below, start with 10 repetitions and work up to 100.

Anyway, let's move on to the first myth Tracy Anderson and Dr Oz set out to de-bunk: 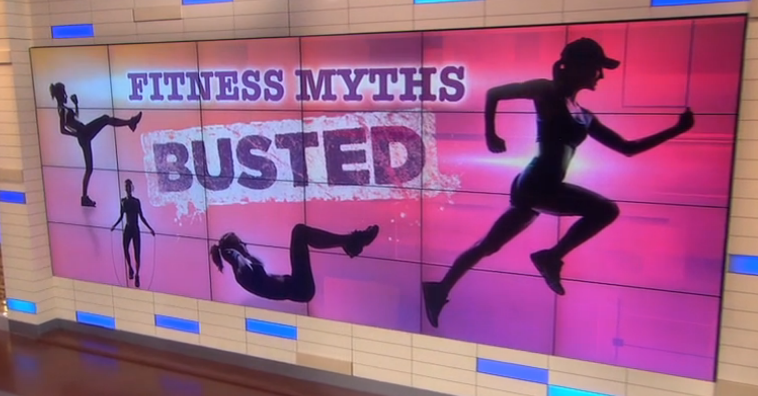 Myth #1: Crunches are the key to flat abs

Dr. Oz: "This is why crunches don't help you get flat abs - it's all about this concept of 'spot reduction,' it doesn't work...

So if you really want to lose the fat so you can see the six-pack underneath, you gotta build up a lot of muscle, not just a little bit of muscle in your belly.  And to do that, Tracy, you say you've got a better way of doing it?"

Anderson: "Yes, I'm going to reach all of those muscles, not just the large ones, and we're going to use our whole body so we're gonna burn calories at the same time - which burns off the fat."

This is an interesting exchange to look at in-depth.  I actually completely missed what Dr. Oz said the first time around - that one should 'build up a lot of muscle' to lose fat and see your abs.  This advice (though not the umm...best tactic for fat loss) completely flies in the face of everything Anderson promotes and suggests, so it's interesting to see how they just rolled with it.

Anderson suggesting that exercises that use more muscles at once burn more calories for your time is true enough. (For instance, doing a deadlift instead of fancy kneeling kicks for "butt toning") And burning extra calories could certainly help to get rid of the fat over your stomach eventually.  When she says "all of the muscles," she's referring to working all of your abdominal muscles, I assume.

There are a lot of exercises that do that.  Walking, squatting, deadlifting...etc.  But the exercise she demonstrates does as well.  It's a perfectly fine exercise, I suppose, but it's not likely to help you out a significant amount more than crunches to reveal dem abs. 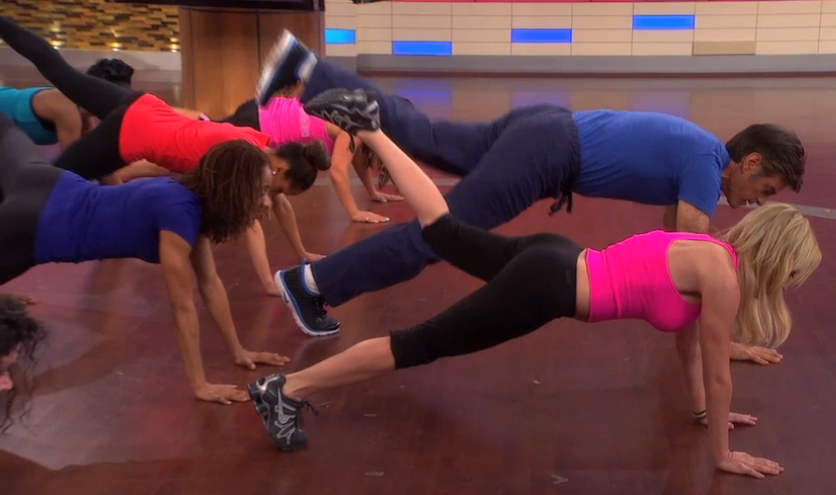 "I can't copyright a plank, so I added this little leg kick."

It's technically true that muscle requires more calories to sustain itself than fat, though the difference is pathetically small.  Regardless, two things with that:

As well, counting on building muscle to be your saving grace in fat loss is probably not the way to go about achieving your goals.  If you've got a significant layer of fat covering those abs, your best bet will be to eat at a caloric deficit (which generally won't allow you to build much muscle anyway) to get rid of it.

Myth #2: The more you sweat, the more calories you burn

Dr Oz: "The amount you perspire is not at all correlated to the amount of calories you burn...you could sit in a sauna...and you're perfectly still burning no calories at all, sweating away.  So it clearly doesn't work.  In order to burn more calories you have to elevate your heart rate."

I don't have too much to comment on here.  This is generally correct.  Sweating more does not equal burning more calories.  You might just be in a sauna, like Oz suggested, or you may be trying to squat in a garage gym with no AC in the middle of a North Carolina summer and have a hard time keeping the bar on your back because it's so sweaty and you nearly pass out.  I dunno.

As far as needing to elevate your heart rate to burn more calories, I'm gonna admit that I'm not 100% on how true that is.  After all, you could go through a weightlifting session picking up heavy weights for few reps at a time not get your heart rate up that much while still burning a significant number of calories.

Anyway, they go on to do some cardio to elevate the heart rate.  Yay.

Myth #3: Stretching before a workout warms up the muscles

Dr. Oz: "Truth is you can actually injure muscles if you stretch before you warm up a little bit."

Anderson: "Absolutely, it's about warming up, it's about connecting your brain to your muscles, getting focused, getting ready to burn calories, build muscle..."

Woah woah woah.  Is this segment a foreshadow to Anderson's impending endorsement of building muscle for women?  Considering that she just released her exercise routine for men to make them "skinny ripped" panthers, as opposed to big, bulky, overdeveloped bison, it seems unlikely.  But then again, strength training for women is catching on...

In any case, I've got nothing against a good warm-up that gets your mind right to do some awesome stuff in the gym. (or do 30 minutes of glorified arm circles, whichever)

In the segment, Anderson says the warm-up sequence she's demonstrating will work on your range of motion, however I could think of quite a few better ways to do so than doing a slight knee bend with a backwards-to-overhead arm reach. Could try something like:

But, whatever, not a really big deal.

We end with a product promotion and that's the end of it.  Seriously, that's all.  Nothing that makes me want to rage and claw my eyes out or facepalm.  It's not a segment I'd be particularly proud of, but it's not one that would make me want to hide under my bed in shame for the rest of my life, I suppose.

And that's the most positive endorsement you'll likely ever hear me say about Anderson.