There's an old adage of the internet: Never read the comments section.

Most of the time this is good advice.  If you get easily frustrated at misinformed opinions, have a hard time controlling what you say to internet strangers, or just want to save yourself the pain of a dozen facepalms, then yeah, comments may not be for you. 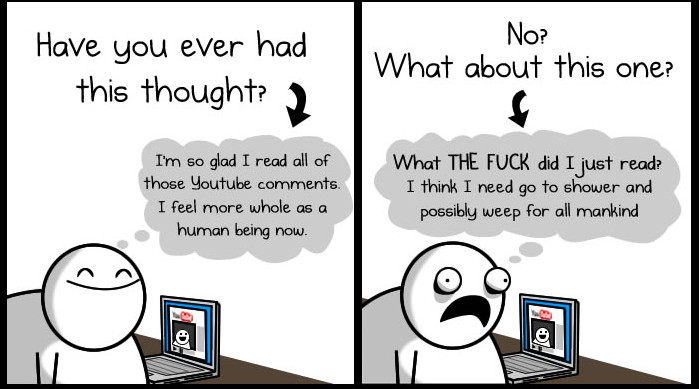 Before I write about a certain topic, I try to do a fair amount of research on it.  This leads me to some heated discussions at times.

There are battles being waged in blog posts and news articles around the net.  Some of them still rage on, some of them are now just smoldering ruins of harsh words and hurt egos with no real victor.

Some common weapons used by these fierce internet warriors are ad hominems and appeals to authority, among other masterful forms of name-calling and condescension.

This is how I imagine flame wars.

We can do better than that.

The internet is a fantastic medium to have a debate on a particular topic:

1) With in-person debates, if you take time to gather your thoughts and make a smart rebuttal, it can seem like you don't have a retort at all.  You look bad.  Try to fill it in with meaningless fluff, and someone, somewhere will call you out on it.  Lose-lose.

With internet debates, however, you not only have your opponent's arguments in front of your face, verbatim, but you have time to gather your thoughts and articulate them in an organized manner.

2) I remember in the last presidential debates, Obama and Romney were debating about oil costs.  It went something like:

Obama: Costs are down from four years ago.
Romney: Actually, they aren't.  They're up <some specific number> percentage!
Obama: No, your information is out-dated.
Romney: No it's not.
Obama: Yes it is.

What could the listener have possibly learned from that?  When you don't have proof in hand, there's no amount of words that can thoroughly de-bunk your opponent in the heat of the moment.

True, you could fact check after the debate, but most viewers aren't going to do that.  With the glory of the internet, you can link to your sources right in your argument!  How fantastic!

3) If a certain piece of information isn't known between the two debating, others can chime in to help fill gaps on knowledge so the debate can continue.Because no one is literally talking over eachother (you can just skip to the comments you want to read), things are much less confusing.

Sadly many of us don't take advantage of this.  I'm not innocent - there have been plenty of times I just had such a witty response to a stupid comment that I couldn't wait to hit the submit button.  I've regretted it everytime.  The only purpose such a comment serves is to make the commenter feel smart.

If you couldn't tell, I feel that internet debates could be a great tool for change.  If you agree, here are 4 things to keep in mind when engaging in yet another discussion on GMOs or the latest T-nation 'cardio makes you fat' article:

1) When you engage in debate, your goal is NOT to convince the person you are debating

During an argument you've probably told yourself "what's the point, he'll never change his mind."  And it's true.  How many times have you engaged in a debate and had your opponent conceded defeat?  It's been known to happen, but it's only like 5% of the time, via a statistic I just made up.

When it's become clear that your debate is a stalemate, comments like "We'll just have to agree to disagree," or this show up:

Approach your arguments with the knowledge that you're not going to win.  Your objective is to educate and persuade the audience.  Trust me, there is always an audience of lurkers who you will never speak to.  You'll probably never know they exist at all unless they post something about getting out popcorn for the impending argument.

I spent 6 years just reading about exercise and nutrition before I ever made a single comment or assertion on any message board.  We're out there.

So even when you know the person you debate isn't going to address the studies you cited or refute solid arguments you gave, keep pushing them to do so.  When they resort to name-calling, anecdotes, conjecture, and excessive obscenity, remain level-headed and positive.  This way you avoid alienating anyone who may be listening.

Keep responding as long as you can do this for the benefit of your audience.  You're giving them ammunition to try out on their own in any debates they do choose to engage in.  And if anything, you're teaching everyone what an argument should actually look like.

2) Yes, it is your job to educate people

If you care about a subject (say, de-bunking the myth that red meat is inherently bad for you), then when someone says "but what about The China Study?" for the umpteenth time, it is your duty to answer them.

You don't have to write out a unique answer for every comment, but at least be prepared to give out appropriate resources for commonly asked questions. ("I watched this documentary Forks over Knives and it said...")

Having FAQs if you have a website on a controversial topic is helpful, but dismissing people's questions with a derisive "Read the fucking FAQ" is not.  Simply stating that there are resources out there is equally unhelpful.  Make it EASY for the person you're debating (well, more importantly for the people reading along) to see how you came to your conclusions.

What books exactly? What number of press releases are appropriate?

I know it can be very frustrating to answer the same questions over and over (spot-reduction and "toning" anyone?), but while they are old news to you, they are brand new to the person who is asking.  They're not idiots and they're not being willfully ignorant.  If you turn away someone who is actively seeking to expand their knowledge, you are not representing your cause very well.

3) Always go back to the science

Reuters put out an article recently about the number of people who believe in medical conspiracy theories.  While these kinds of stories are probably old news to many of my readers, as the article states there are plenty of people who still believe in them.

What can you do when someone believes in 'conspiracy theories'?  Are they beyond saving?

Well, if someone believes that herbal supplements are the best way to treat cancer, calling their belief a 'conspiracy theory' right off the bat is probably not the best place to start.  They obviously don't see it that way.

In a similar vein, what good does it do to tell someone "The FDA cleared it" when debating GMO's if they already distrust the government and think they're in bed with Monsanto?

If someone has had bad experiences with doctors their whole life, will the argument of "The AMA stands behind it" help in a conversation about vaccines?

Regardless of how much sense it can make to call upon these arguments, for some people they will fall on deaf ears.  In this case you must always fall back on the scientific studies that the FDA or AMA based their judgments off of.

"But Kat," you say, "the studies probably won't mean anything to them.  Many of these studies are not lay-person friendly."

That's absolutely true.  Not being able to comprehend studies is a huge issue in these kinds of arguments and why it's so important that everyone gets a basic understanding in how they work.  (Even then it's not enough to say you'll be able to understand as well as someone who actually works in the field) Unfortunately that's another topic for another day.

Sometimes you are just going to have to let someone go when they fall back on arguments that are impossible to refute. ("All of these studies are secretly funded by Monsanto", "there is literally nothing you could say to change my mind", etc.) The best you can hope for is that your audience doesn't feel the same way.

You (usually) never know when someone will come out with a new study that blows your beliefs out of the water.  They may even confirm the opposite and you'll have an awful lot of apologizing to do.  (If you wonder why researchers seem to just refuse to say things in certain and clear-cut terms, that's why.)

Got any other suggestions?  Think I'm crazy and that humanity is inevitably doomed?  Wonder if I've ever seen Idiocracy? (yes) Let me know!