In our last segment we went over the introduction and first segment of a Cosmo UK spread telling us how to best get a beautiful bangin' bombshell bootylicious bikini bod in a mere two weeks.

If that sounds too good to be true, it's because it is.  Let's delve into why in Part II of our investigation:

Here's the deal on exercising to get great abs:

You could be doing the best exercises for abdominal activation in the world, but it wouldn't matter if you don't lose the fat along with increasing the muscle.  Now, to be fair, the introduction to this article states you are to be eating 1,200 calories per day - anyone will lose weight on that.  (Not that I advocate eating that little) For most women, this would be enough to get closer to the abdominal muscles they want.

Tracy is also correct that plain crunches don't do a lot for your abdominals.

But, heavy squats and deadlifts activate various core muscles better than other bodyweight "ab" exercises like a sideplank.  (After all, your abs are a big player in keeping you upright during these lifts, as opposed to crumpling over that heavy weight on your back or in your hands) As well, doing certain exercises on an unstable surface doesn't seem to be doing us many favors either.

Here's an important question to ask yourself: What are you trying to accomplish with these ab exercises?

After all, 80 reps of any fancy ab exercise isn't going to build you much muscle.  And you're not going to spot-reduce away your belly fat.  So what are these abdominal exercises really accomplishing?

Maybe they're burning a few calories.  Maybe if you were completely sedentary before, 80 reps would build a little bit of muscle - but probably nothing that would cause a big visible difference.

Here are a few reasons to do abdominal-isolation exercises:

My advice for exercises to get better looking abs are to supplement heavy squats and deadlifts with abdominal isolation exercises that are difficult to complete in the 12-15 rep range.

In any case, there is nothing secret about the two moves presented here.  They're just a couple of exercises that activate your abdominals.  You could accomplish the same thing with a variety of other moves as well.

Our gym friend is swimming and the treadmill.  Perhaps because you need to be at a caloric deficit to reveal your abs, and exercise can help accomplish that?  Don't see much of any other reason.

Our fridge friends are cherries, red grapes and blueberries.

"The chemicals responsible for their colouring are anthocyanins, which, according to research, can burn abdominal fat."

There have been a couple of studies showing that, in obese rats, fed either a very high-fat or very low-fat diet, consumption of blueberries or cherries appear to reduce markers for various metabolic diseases and a decrease in abdominal fat when compared to an equal-calorie control group.  (Well, the link about the blueberry study doesn't specify if the control group had an equal-calorie diet, but I'll assume they did.)

Unfortunately, rat metabolism can differ from human metabolism.  Truly all we know right now is put quite succinctly in the conclusion of one of the studies:

So, eat cherries and blueberries if you like them - but I wouldn't count on it to make a large difference in your abdominal fat.  (But, on the other hand, it might - we really don't know one way or the other!)

"If I'm working with someone who needs to see some results fast, I will focus on their arms because they really don't take long to show results," Tracy says.

This can be true, especially if you have a client roster like Tracy's - people who are already pretty thin and lean.  For most women, the arms and upper body in general don't hold much fat relative to the lower body. (Minus the girls, of course.) So you're already 50% of the way to toned / firm / sculpted / shapely / whatever buzzword you want to use arms.  The other 50% is just adding some muscle.

How to get firmer arms: Step 1 - Have little bodyfat Step 2 - Have some muscle

Both of the moves Anderson gives work large muscle groups - exactly what she says will cause bulk.

The only key to 'great' (by which we are to understand, means small with low body fat) arms are Step 1 and Step 2 outlined above.  You could accomplish that with no weights and just do bodyweight resistance exercises like push-ups, or you could accomplish it with heavy bench or overhead press.  Doing 100 repetitions of overhead press with 3 pound dumbbells is essentially like doing cardio on an ergometer, except less shoulder-friendly.

Our gym friends are the rowing machine or arm bike (the ergometer like I linked above).  I'm surprised that Anderson is okay with these, considering she is often quoted as saying running will bulk your legs.  So wouldn't an arm bike bulk your arms by that same logic?

Anyway, if you're going at an easy pace, whether or not you use your arms in your cardio doesn't matter that much.  The only thing you're looking to accomplish here is burning overall calories - you can't spot reduce arm fat by using them during lifting or cardio.  If you're doing high-intensity intervals it's a little different, but for the most part just do what you enjoy if you're looking to get a little extra calorie burn in.  I'd suggest walking the dog or playing with the kids!

Our fridge friends are eggs, salmon and lean meat.

"Flabby arms can be due to low testosterone.  Good fats in eggs, organic salmon and lean meats can help."

If I'm reading this correctly, Cosmo is admitting that saturated fat is not a 'bad' fat like it has so often been labeled, which is awesome!  Yay!  (Chicken and eggs contain saturated fat)

Moving on to flabby arms being due to low testosterone - I'm uncertain what they are basing this off of, but my guess is it's off Charles Poliquin's Biosignature method.  (Which has a wonderful, in-depth critique here) 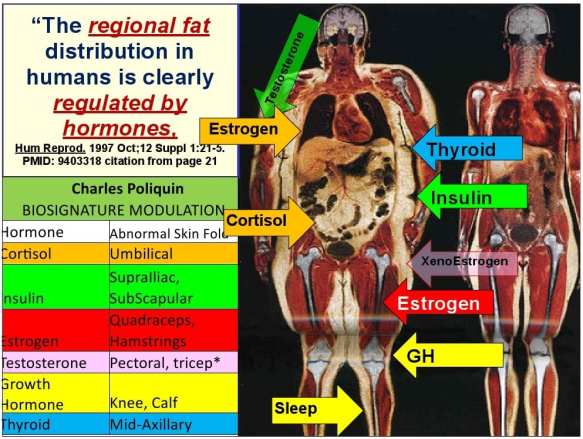 How hormones control fat distribution according to the Biosignature Method. (Which bear in mind has a ton of flaws)

In any case, there isn't much clear-cut evidence for low testosterone causing you to store an abnormal amount of fat on your arms.  Your best bet based on what we know now is to just lose overall bodyfat and gain muscle in your arms.

However, eating the 'fridge friends' above can absolutely help you with that - they're great sources of protein which can help you build lean muscle as well as keep your calories down.  And most importantly, they're delicious.

We'll finally conclude this in Part III.  I really only intended this to be one post, but apparently there's a lot to say on a simple two-page spread!